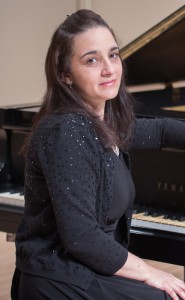 Amanda Virelles has played for audiences around the world captivating them with her unique sound and deep interpretations. Her performances have been described as sensible, profound, and energetic.  She has performed as a soloist as well as collaborative artist throughout the United States, Europe, South and Central America and the Caribbean.

Amanda began her piano studies in Cuba with Emilio Morales, and later with Serguei Leschenko, continued with Heirinch Neuhaus’ protegé Margarita Fyodorova at Moscow State Conservatory Tchaikovsky, and received her Master of Fine Arts Degree from the Russian Academy of Music Gnessins in Moscow, Russia, under the guidance of Inna Malinina, former disciple of  Alexander Goldenwieser. Virelles also holds a Master Degree and a Doctoral Degree in Piano Performance and Pedagogy from the University of Southern Mississippi, where she received both a full assistantship and a fellowship as the winner of the Doctoral Assistantship Competition. While at USM, Amanda was a student of Dr. Lois Leventhal.

After winning First Prize and an Special Prize for best Cuban and Latin-American music performance in the “Amadeo Roldan” Piano Competition, in Cuba, she was given a full scholarship to study in Russia. She appeared as a soloist with several orchestras in Europe and South America under the direction of renowned conductors such as Yoshikatsu Fukumura, Mikhail Shervakov, Dmitir Manolov, Fillipo Zigante, Kimbo Ishii – Eto, and Miguel Harth-Bedoya. She was a featured winner of the William T. Gower Concerto Competition with the USM Symphony Orchestra under conductor Jay Dean. She has also performed under the baton of Raul Munguia and  Alejandro Drago.

Amanda is an avid performer of chamber music and plays regularly with “Duo Guitiano” with Colombian-American guitarist Carlos Castilla and 4HANDS Piano Duo, with Czech pianist Kristina Henckel. Her solo and duo recordings are available in digital platforms.